From 1st September IOM Energy will be introducing new gas tariffs. These tariffs have been carefully reviewed by CURA which has ensured that IOM Energy is meeting its new legal obligations to charge a price for its gas that reflects the cost of supplying it.

CURA understands that consumers will have concerns about this increase and has therefore published answers to Frequently Asked Questions on this topic.

We have also updated the information provided on our Consumer Advice poster.

You should submit a meter reading to IOM Energy as close to the 1st September as possible, to ensure that you are billed as accurately as possible. You can do this online or by calling 644400.

Wholesale gas prices have been extremely high and volatile for several months, however prices have increased considerably in recent weeks spurred by Russia reducing the flow of natural gas to Europe. CURA needs to ensure that tariffs cover the cost to supply gas on the Isle of Man, not doing this risks disruption to the gas supply.

The increase in your bill will vary depending on the amount of gas you use.

CURA has carried out a consumer bill impact assessment, but would caution that there are a number of caveats around the use of these numbers. They will not be reflective of every household in the Island.

The Authority has used standard regulatory assumptions for high/medium/low user consumption estimates at the following levels (kWh per annum) and used the All-Island central heating tariff for the purposes of this calculation:

The annual bill is an estimate of the average gas tariff usage over the next 12 months, assuming the tariff remains at this level. In reality this is unlikely to be the case given the next review scheduled for December. In addition to this there will be a standing charge of around £61, however the standing charges have not been increased.

The winter bill is an estimate of the gas tariff usage over the upcoming winter, based on 75% of the total year’s consumption, assuming the tariff remains at this level. In addition to this there would be a standing charge of around £31, however the standing charges have not been increased.

As shown in the graph below, wholesale gas prices are extremely high and volatile. When the international situation improves and commodity prices fall, the tariffs will fall to reflect this. Unfortunately, it is impossible to say with any certainty how long the current crisis will last or if further increases would be required in future. 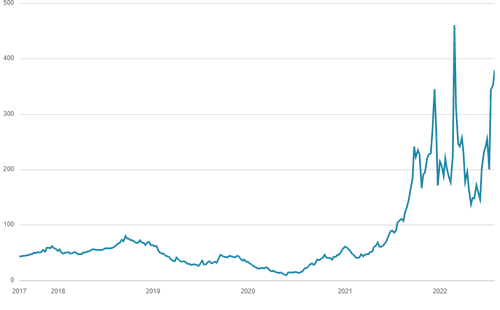 It is often asked how UK tariffs are different if the gas on the commodity market effectively costs the same for all? The simple answer is that the gas does cost the same, the difference is how the regulators pass that cost through to consumers. Firstly, the Isle of Man’s tariffs are set on a forward-looking basis whereas the UK’s tariff cap is backwards looking. What this means in practice is that the tariffs will rise and fall here on the Island faster than they will in the UK.

When setting the tariff at the start of the year, we take account of the forward prices for the coming year and use the average of that to determine the likely cost of gas over the period. The tariff is then reviewed half-way through the year to correct for any movement, up or down, in the assumed gas prices. When the price cap is set in the UK it considers the historic price of gas on the commodity market, the graph below demonstrates this:

What this graph shows is that the UK price cap for Summer 2022, which is currently in place, takes account of the average cost of gas on the commodity market between August 2021 and February 2022, which was approximately 1.30p/therm. In practice this means is that the UK’s default tariff cap has not yet taken account of the commodity costs that Isle of Man customers have already endured. An announcement from Ofgem regarding prices that can be charged from 1st October is due in the coming weeks and CURA expects that a particularly large increase will be required in the UK.

Finally, gas suppliers supply gas to consumers by distributing it through the gas network. These networks represent a fixed cost to the suppliers that must be spread over the number of customers. The cost of operating and maintaining Isle of Man gas network is spread across approximately 24,000 customers whereas UK suppliers will be serving a much larger customer base and in many UK locations households are more densely populated, meaning more customers can be served from the same size network. Unfortunately the cost of running the gas network on the Isle of Man is likely to be something that will always be marginally more expensive here than in the UK. 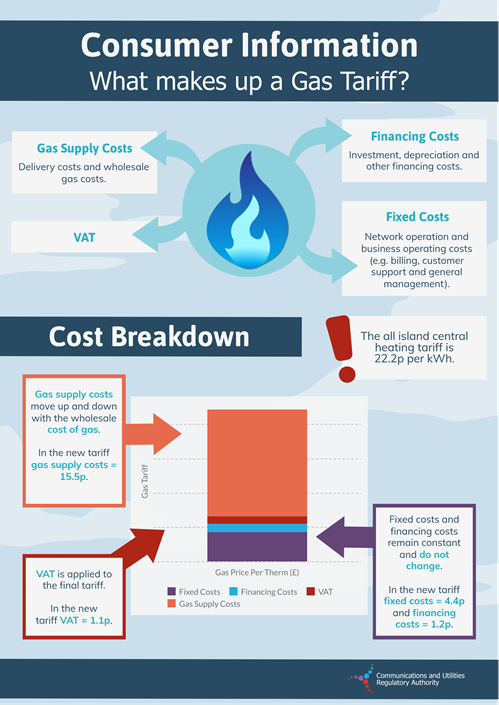 Tariffs will move up and down in line with wholesale costs. Approximately 4p of every unit (kWh) of gas sold covers the fixed costs of the network and 1p is the network return to IOM Energy, often referenced as ‘profit’, but is intended to cover the cost of debt and cost of investments. The remainder covers the cost of paying for the gas itself and the VAT.

CURA recently published its response to consultation on the new regulatory framework which set out IOM Energy’ regulated return for the next 5 years. This is made up of a 5.45% weighted average cost of capital return and a 2.1% retail margin.

The weighted average cost of capital return is not the same as profit, it is the return required by investors (Manx Energy Shareholders) and lenders in order to finance the business. The 5.45% return is allowed on the regulated asset base of the business, mainly the gas network (mains and meters) and is there to ensure that investors will continue to invest in maintaining the network. CURA controls what is added to the regulatory asset base to ensure only investments relevant to delivering gas to consumers is included.

The retail margin principle is similar to the weighted average cost of capital in that it is designed to provide a return to investors so that they can finance the retail side of the business, such as billing and customer service systems. It also compensates for risks, such as delays in payments or other unpredictable events, faced by a retailer and help ensure the ongoing operation of the retail business.

Without the regulated return, which provides a return to investors, there would be no reason to invest in and sustain the business.

IOM Energy forecast its expected demand by looking back at previous year’s usage in the relevant months. It also estimated wholesale gas costs by looking at current market information, including forward prices.

CURA has determined IOM Energy’ allowed return for 2022 under the regulatory framework with IOM Energy demonstrating to CURA that these tariffs would not result in IOM Energy earning more than it's allowed return.

The next tariff change is expected in January 2023. IOM Energy will have the ability to change tariffs twice a year, around January and July time, with the approval of CURA. There will also be additional reviews that will be triggered if tariffs need to change by 10% in between these times. This is to ensure that tariffs remain reflective of the costs incurred to supply gas throughout the year.

CURA has to balance the need for tariffs to be as reflective as possible of the cost of supplying the gas, against the need for tariff stability. After careful consideration, it was determined that a 6 monthly tariff review with the ability to trigger additional reviews, where needed, strikes the best balance.

In reality it is going to be a change in the wholesale price of gas that triggers a review. With the current situation as volatile as it is, CURA will be looking for a sustained movement in the wholesale gas price, or a clear shift in market trends to be the trigger for a tariff review.

CURA is aware that this comment has been made a number of times over recent months, however, this is incorrect. There are two scheduled tariff reviews per year, in July and December.

Reviews are not linked to or triggered by Manx Energy’ profits. If the gas tariff needs to change by 10% (up or down) because of commodity costs, or another unforeseen event, then an additional review can be triggered. For example, should commodity costs see a sustained movement that would result in approximately a 2.2p change in the tariff, a review would be triggered.

Increasing gas prices is a worldwide issue and there is unfortunately very little that can be done to protect gas consumers from it.

On 4th August 2022 the Isle of Man Government announced it was looking into further support for families to help with rising energy costs. The Government is currently working on additional support measures to help consumers with the rising cost of living. You can find more information on the support being offered on the 'IOM Help for Households' website.

You can contact IOM Energy to discuss setting up a payment plan and there is also budgeting help available from the Office of Fair Trading for those who need it. The confidential phone number is 686510.

No. IOM Energy now has the ability to earn up to the maximum regulated return of 5.45% on its regulated assets and a 2.1% retail margin.

The regulated return is not the same as profit, as the allowed returns must cover any financing costs the company incurs, such as interest payments.